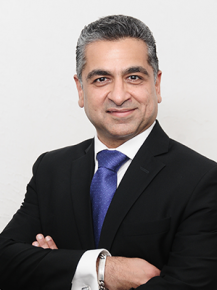 Ameer Ismail’s illustrious career spans over two decades. He joined Lintas in 1996 and was entrusted with the responsibility of building the PR business – GolinOpinion (formerly LinOpinion). He now has been appointed President – Lintas Live, the rebranded creative led digital first PR and communications agency. Lintas Live is part of MullenLowe Group’s global communications network which includes U.S. based agency MullenLowe PR – voted Global Creative PR Agency of the Year in the Holmes Report 2017. Ameer will be working closely with the global leadership to further build and enhance the network offering.

Recognizing the transformation of the PR industry, he was instrumental in structuring the JV with Golin in 2013 and was appointed a member of Golin’s Global Leadership Group in 2016. GolinOpinion( now Lintas Live) has been recognized as one of the leading players and most respected brands in the PR industry. The agency grew successfully to include a portfolio of reputed clients such as Seiko, Etihad Airways, Starbucks, Marriott Hotels, Porsche, and Sony Pictures Networks, to name a few. In recognition of his overall contribution, he was promoted in 2016 to the post of President. In addition to leading the PR business he has been a part of the senior management of the group and has essayed several leadership roles in the group during his tenure. He was the Chief Growth Officer for PointNine Lintas, the head of other group businesses including DCell, Lintertainment and Advent.

Ameer serves on the advisory committee of several management forums and is a part of several award platforms and juries. He has been well recognized as one of the leading personalities in the PR industry and won several awards and accolades during his tenure.  From being on the Campaign A list to the CMO Asia Award for Outstanding Contribution to Corporate Communications in Singapore in 2011. He was on the prestigious list by Reputation Today magazine of India’s top 10 leaders in the PR industry and included in the list of the top 100 professionals in corporate communications. He was also a part of the top 100 Influential Game Changers in Corporate Communications 2020, an initiative by exchange4media. He is a contributor and mentor to upcoming talent in the industry, regularly lecturing at leading management institutes, including the Northpoint Center of Learning and is a part of the SCORE advisory council.