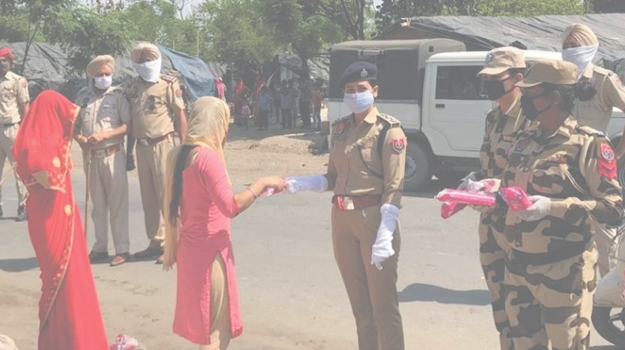 GolinOpinion Delhi, in association with Soothe Healthcare (an organization that manufactures sanitary pads under the ‘Paree’ brand name), initiated a national advocacy campaign championing the issue of women hygiene while ensuring the provision of sanitary pads to women in need, across states, during the lock-down. The first phase was initiated on the 17th of April 2020, in association with CII IWN, Rasoi on Wheels, Punjab Police, and subsequently associated with Municipal Corporation of Gurugram, Government of NCT and District Administration of tier-II/III cities in the second phase.

Sahil Dharia, Founder & CEO of Paree, believes that “A woman and her needs are at the core of everything we do at Paree and there was a larger conversation at play here – that women are the primary caregivers in our families but many times their needs take a backseat. The intent was to prioritize their health and open up a progressive conversation around a woman’s menstrual hygiene needs by saying that sanitary pads are as essential as food”.

He further added, “The campaign was envisioned with GolinOpinion Delhi team, who believed in our vision and led campaign execution for #SheFirst #PadsAreEssential with meaningful associations. The success of our campaign is the result of relentless effort, expertise and a dynamic approach by all the teams involved, all that happened to be led by women, helping us take our message to millions of people”.

This campaign appealed masses – to voice the importance of women hygiene and prioritizing it; it is always ‘She come First’. There were almost muted conversations about women hygiene and how these women would procure something that is an absolute necessity for them- sanitary napkins. This is a social issue that GolinOpinion and Paree were committed to highlight and voice. The campaign gained the support of women across geographies and sectors. From Ms Gurpreet Kaur Deo, IPS- ADGP- Punjab Police, who not only supported the thought but also appreciated the larger #Shefirst movement to Saina Nehwal, Garima Avtar, Rinki Dhingra (Chairwoman CII-IWN) and Manika Badhwar (Co-Founder, Rasoi On Wheels). These women felt strongly about the cause and stood by the social message being voiced and platformed through the campaign.

According to Nicky Singh, Vice President, GolinOpinion Delhi, “This success of the campaign lies in the fact that it has got everybody thinking about menstrual hygiene and menstrual health. We have now started generating interest in conversations around the otherwise uncomfortable issue of menstrual hygiene and women’s personal hygiene. This campaign is a social commitment for both GolinOpinion and Soothe Healthcare and a critical step in the right direction. The issue we are contending with, is larger than just sanitary pads. We are looking to change the social stigma and ‘black bag’ mindset around menstrual hygiene. We wanted to go all out to create a campaign, which was thought-provoking and challenged existing social perceptions. This is stage one of the campaign and we have a long way to go and many a glass ceiling to break in order to address the issue of menstrual and women hygiene.”